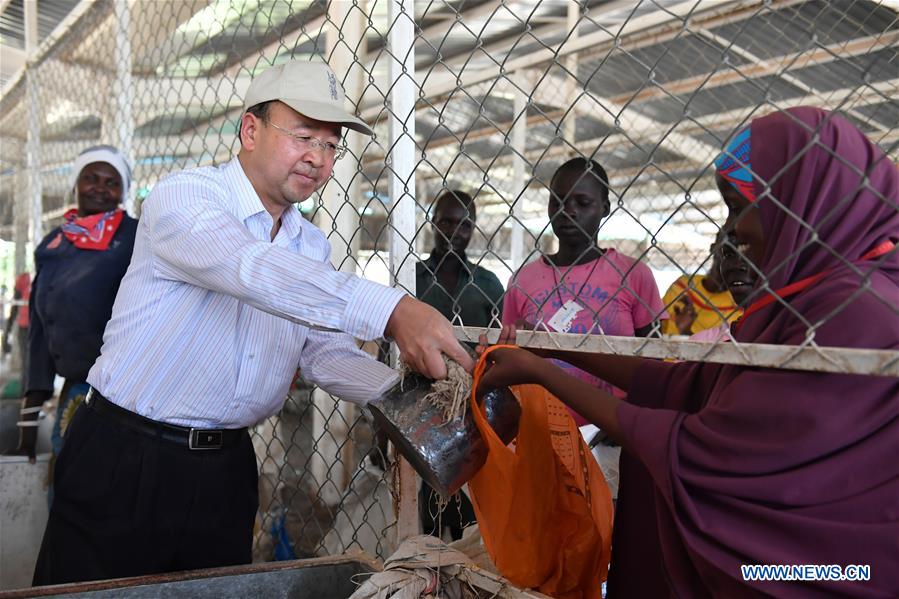 Recently, China has stepped up assistance to support the growing number of refugees and internally displaced persons (IDPs) affected by conflicts, poverty and climatic shocks in several African countries, providing a new lease of life for many on the continent.

The world today is witnessing the highest level of displacement on record. Globally, about 68.5 million people have been forced to leave home, among whom nearly 25.4 million are refugees and over half are children, according to statistics from the United Nations High Commissioner for Refugees (UNHCR).

Africa hosts nearly a third of the world's refugees and IDPs, UN Secretary-General Antonio Guterres said when addressing the 32nd Ordinary Session of the Assembly of the African Union (AU) on Sunday.

The AU summit was rallied to primarily deliberate on pressing issues of the continent such as forced displacement as well as peace and security.

Under the theme of "The Year of Refugees, Returnees and IDPs: Towards Durable Solutions to Forced displacement in Africa," the two-day session of the AU heads of state is also deliberating the establishment of a continental free trade area.

The issue of forced displacements in Africa remains sadly remarkable, Moussa Faki Mahamat, chairperson of the AU Commission, said at the opening of the 32nd AU summit.

"It is important to tackle more deeply the root causes of the phenomenon," he said.

Countries like Kenya and Uganda are hosting refugees who have fled during the turmoil in neighboring countries such as Somalia, South Sudan and the Democratic Republic of Congo (DRC).

Africa's refugee burden has yet to ease despite the international community's concerted efforts to restore normalcy in some hotspots. Meanwhile, terrorism has affected a large swathe of the Sahel region including Mali, Burkina Faso and Chad, creating a new refugee crisis.

Countries like Cameroon and Central African Republic (CAR), which are experiencing sectarian and tribal conflicts, have also seen a growing population of IDPs, who are in dire need of humanitarian assistance.

Recurrent droughts in the Horn of Africa is likely to fuel further displacement of civilians given the weak capacity of host countries to cater to emergency needs.

Nevertheless, there is a consensus that African countries must reach out to both traditional and new allies when seeking a durable solution to the growing burden of refugees. The mental and physical health of the refugees and IDPs are another concern.

Under enormous stress, refugees and IDPs are vulnerable to infectious diseases with limited access to health services, said Peter Sands, executive director of the Global Fund to fight AIDS, Tuberculosis and Malaria, which is active in helping refugees and IDPs in Africa.

Together with international organizations including the UNHCR, the World Food Programme (WFP), and some leading developed countries, developing countries like China are also scaling up their efforts to eliminate the hardships faced by refugees and IDPs on the continent.

China has pumped large amounts of material and financial resources to Somalia, Kenya and other African countries, which are hosting some of the largest refugee camps in the world today, said Gerishon Ikiara, an economics lecturer at the University of Nairobi and a former government official.

In the last couple of years, China has helped ease the refugee burden in Africa through donations of food, vocational training and other means to help vulnerable populations become self-reliant.

In June 2017, the Chinese government donated 5 million U.S. dollars to the WFP to purchase 9,000 tons of cereals for about 420,000 refugees living in the Dadaab and Kakuma camps in Kenya.

After more than a year of ration cuts caused by funding shortages, new donor contributions from China and other countries have allowed the WFP to resume full food rations for four months.

WFP Country Director and Representative for Kenya Annalisa Conte lauded the critical contribution from China, saying the WFP has struggled to provide adequate food to refugees living in camps in food-insecure northern Kenya due to insufficient funds.

"I thank China for its generous donation, which will allow the WFP to give us more food and make our hard life a bit easier," said Ceaser Okulo Unu, a refugee from Uganda lining up for the food aid.

China has actively participated in humanitarian interventions in Somalia, where decades of conflict and recurrent drought have pushed civilians to the margins.

In April 2017, China donated 10 million dollars through the WFP to provide emergency food aid for more than 200,000 people in Somalia, fulfilling its long-term commitment to assisting the Horn of African region in the displacement of civilians.

China has also provided food aid and financial support to facilitate the resettlement of refugees in Uganda, many of whom came from neighboring South Sudan and the DRC.

In May 2018, the Chinese government donated 5 million dollars in emergency food aid to the drought-affected communities in the Karamoja region of northeastern Uganda. And a month later, China provided 500,000 dollars to support the resettlement of refugees.

Ugandan Minister of Finance Matia Kasaija said the Chinese donation came at a critical time as the over 1.4 million refugees in the country are in desperate need of humanitarian relief.

In addition to the donations, China has also contributed to improving living standards for refugees.

The "Bright Future Program" involves giving the beneficiaries small grants and training them in better farming practices in a bid to boost agricultural production and increase household incomes.

The program also seeks to train young refugees in business entrepreneurship. About 19,000 refugees and Ugandans are expected to benefit from the 15-month project.

"Though there are challenges in communication due to cultural differences, I am happy to contribute to Chinese humanitarian aid overseas," said Liu Liangchuan, manager of the program.

The organization came to Uganda to share its experience of poverty alleviation and help refugees maintain their dignity, said Wang Xingzui, executive vice president of the CFPA.

According to the CFPA, the program is expected to be long-term, focusing on the social and economic development of the refugee camps.

"By China coming in, this is a big relief to many African countries that are facing crises or are burdened due to crisis in neighboring nations like Kenya and Uganda," said Mangunyi.