ISLAMABAD (China Economic Net) - If there is a kind of love that can surmount the mountains and the seas, go beyond nations and cultures, and transcend time and space just to hold one’s hand till the end of the world, is it not something to long for?

On January 14, 2019, in the friendly state of Pakistan where the frangipani blooms amid the flourishing green vegetation in abundance; Xu Long, a young man from the Sinohydro Bureau 7 Co., Ltd of Power China is sitting in a car, waiting eagerly to for his bride who will show up in 20 minutes. 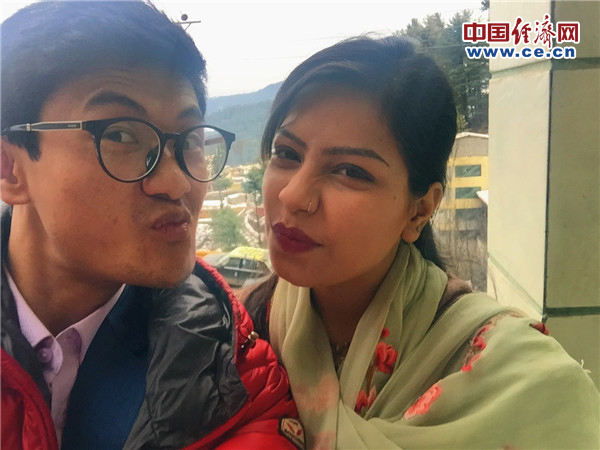 Being Chinese, Xu Long is just starting to understand the customs of Pakistani weddings, so he has not yet seen the bride in her wedding dress, which makes his mind abuzz with imagination and anticipation. But there is no doubt in his mind that today, she must be as shining and radiant as a star, and as luminescent as the moon. At this moment, he is experiencing unprecedented mixed feelings; nervousness, excitement, and relief after a long period of expectation. It has been an arduous journey for them to finally reach this point and welcome this day! 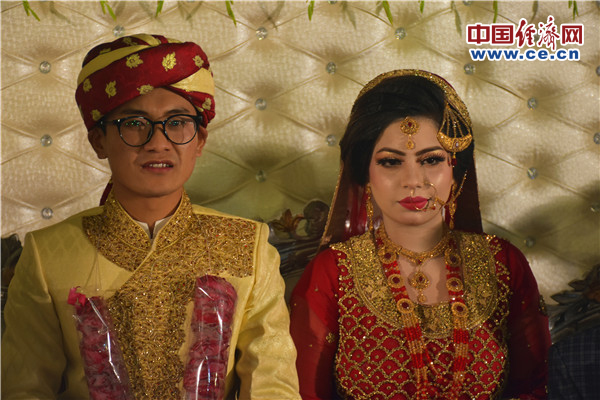 Xu Long is a Hui (Muslim) Chinese born in Ningxia. In 2016, he joined the Sinohydro Bureau 7 Co., Ltd and was assigned to the Karot Hydropower Project under China-Pakistan Economic Corridor, the flagship project of the Belt and Road. By chance, he formed a romantic connection with a local girl named Fatima Nadeem on Facebook. Through a period of text communication, Xu Long, a sentimental young man who had just began his career far from home was deeply attracted by this kind and carefree Pakistani girl, whose positive and optimistic attitude cast a ray of light on his life. Similarly, the quality of humor, sincerity, and respectful attitude in Xu also inadvertently touched the girl’s heart. Gradually, the relation between them grew more intimate, from text chat to voice chat, then to video chat, and from general conversations about life to feelings and mutual affection, until they fell totally in love with each other.

Yearning to meet in person, Xu took a day off to have a long-awaited date with Fatima in the trendy St. Torres shopping mall in the city of Islamabad.

At the station near the shopping center, Xu Long strode back and forth with an armful of carefully selected roses, anxiously waiting for his girlfriend who he hoped would be arriving shortly, also struggling with the possibility that she might not come because he was worried he was not good enough for her.

And then they finally met. Initially, they were a little shy when greeting each other, and dealt with it by diverting their attention to other objects, like eating or shopping. However, love is the most difficult of emotions to conceal, especially with the surrounding people casting curious, inquisitive looks towards them, which made them feel even more awkward. 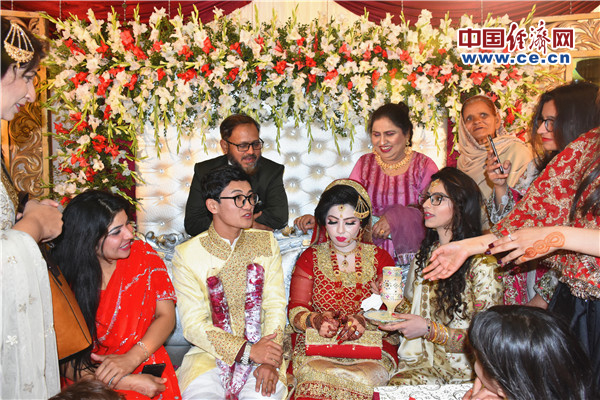 True love brings with it both sweetness and bitterness. Their love story received a slew of admiration from colleagues and friends, but as time went by, the problems that long-distance and transnational love must face became gradually highlighted. When Fatima's father found out that his daughter was in a relationship with a foreigner, he asserted his opposition with a firm attitude and even prevented them from communicating. The obstruction of her father was like an insurmountable barrier that attempted to extinguish the nascent flame of love between them that had just ignited. Xu never given thought to giving up in face of adversity, hoping to impress her family with great patience and sincerity, even though he knew better than anyone that the resistance to their relationship might go far beyond this.

Under such circumstances, the lovers began to have quarrels, and even brought up the possibility of separation in the most difficult of times, but at last they couldn't help but contacting each other again and reconciling.

Since the opportunity to spend time together was rare, Xu Long cherished every second of staying with Fatima. In Xu Long’s own words, “I am most afraid of my girlfriend’s silence. As she is a lively and active girl, you can identify when she remains silent that there must be something burdening her mind. On encountering such a situation, I would tell her a story and lead her out of that depressing mood, and after a while she will be happy like a child. "

Family Members of the Bride

Xu’s care and tolerance for Fatima was recognized by her parents, and with the trust generated by the in-depth understanding of Power China, they gave their blessing to the young couple to care for and cherish each other, as well as reminded them to not allow love to affect work, and always keep a self-motivated attitude. Every time Xu takes a vacation in Islamabad, her benign parents invite him as a guest, give him a variety of local cuisine, and also take the initiative to introduce Xu to other family members and friends. Besides, they also express appreciation for Power China. 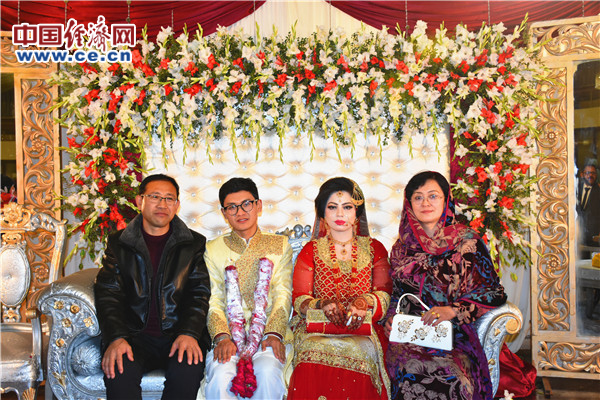 At the Eden Hotel in Islamabad, Xu Long and Fatima held a wedding ceremony in accordance with the traditional customs of Pakistan, attended by many jubilant relatives and friends. Xu Long’s parents came from Ningxia in advance to meet and be a part of the preparations with Fatima’s family for the wedding. With their blessings and under the spotlight, the bride’s parents personally entrusted their daughter’s lifelong happiness to the handsome young man from Power China. The bride and groom sat on a brightly lit and beautifully decorated stage embellished with flowers.

There are no words in the world more touching than: we promise to love each other, for better or worse, through sickness and health, until death do us apart.

BACK TO TOP
Edition:
Chinese | BIG5 | Deutsch
Link:
About CE.cn | About the Economic Daily | Contact us
Copyright 2003-2015 China Economic Net. All right reserved
Love in Pakistan: CPEC brings together two lovers from different countries and cultures
Source:CE.cn | 2019-01-28 09:25
Share to
保险百家乐0